As Jacob described in his presentation this afternoon, Group 3 is discussing social interaction and responsibility in Japanese society based on the Confucian tradition and expectations. We will be discussing topics like filial piety and responsibility, lust, and the subdued role of women in the final draft of our podcast. The section relating to the subdued role of women has inspired my fellow group members and I to research various female Yokai and how they reflect Confucianism’s influence on the expectations of women in Japanese society. Earlier this week, we took a closer look at the Yamamba, or Mountain witch. This afternoon, I found another female Yokai, known as Ubume, in Michael Dylan Foster’s The Book of Yokai. 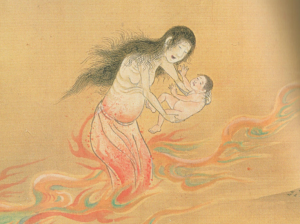 The picture above depicts a ghostly woman with gray hair holding her newborn child. She is usually thought to be the spirit of a woman who painfully died during childbirth. Typically, an individual, most of the time a male, will meet her at a fork in the road or before crossing a bridge. Covered in blood and crying while cradling her infant, she asks the man to hold the child before disappearing. The baby becomes heavier and heavier in the man’s arms until he can’t move from fear of dropping it. In some legends, the man is rewarded for his dedication and effort with amazing physical strength and capabilities.

Death during childbirth was extremely common prior to the modern period, providing a potential explanation and origin for the conception of this Yokai. One legend or tale related to the Ubume details the story of a shopkeeper who is repeatedly visited by a strange woman. One night, the store owner follows the strange woman after she leaves to discover her disappearing into a graveyard before hearing the sound of a crying baby. As he ventures into the graveyard, the shopkeeper finds the corpse of the woman in a dug up grave with a healthy, live infant beside her. The child, in some legends, grows up to be a successful monk.

Within the context of Confucianism’s influence on the subdued role of women, I think the Ubume is an excellent example of the value placed on Japanese women limiting themselves to the responsibilities of the household rather than pursuing more impactful roles in society or government. A woman dying in childbirth meant the child’s primary nurturer and caregiver would be absent; this was surely seen as a tragedy, depriving the son or daughter of a vital foundation established during childhood that ensured success later on in life. Therefore, we see this mother searching for the proper environment for her child while crying over her inability to be there for him or her.

While we have not incorporated this Yokai into the script, like we have with the Yamamba, I think it is definitely something to investigate further and see where this takes us. There is great potential for us to further expand the dialogue surrounding the subdued role of women and develop and build upon what we have already established with our secondary sources and the information on the Yamamba.

Stay tuned for more information! Have a great weekend!

Group three decided on the podcast topic of Confucianism influences on Japanese gender roles during the Heian Period and their importance in day to day life. We came to this topic through the research and the books found during our research in the library.

For those who may not know the Heian Period in Japanese history was from 794 – 1195 A.D. In 794 the emperor Kanmu moved the capitol to Heian-kyo which means capitol of “peace and tranquility” and is now known as Kyoto. According to newworldencylopedia.org, “During this time, Emperor Kammu supported the emergence of new Buddhist movements by sending students such as Saicho and Kukai to China during the Tang Dynasty.” The Heian Period the Fujiwara family was extremely influential. Metmuseum.org explains that, “The Fujiwaras succeeded in dominating the royal family by marrying female clan members to emperors and then ruling on behalf of the offspring of these unions when they assumed the throne.” Overall, the Heian Period is often considered as the height of the Japanese imperial court and of aristocratic culture.

Emperor Kanmu is shown below! 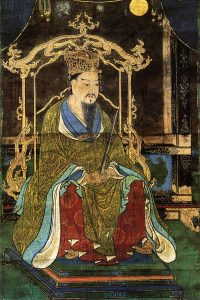 Hope you enjoyed the brief history! Have a great rest of the weekend.