Our study of East Asian folklore is coming to an official close soon. Monday and Tuesday will conclude with group presentations (and mostly likely blog posts about them), and the submission of the final podcast for your viewing pleasure. The podcast series, titled Gods, Ghosts, and Spirits of East Asia, should be available to the public within two weeks!

As for Group 2’s individual podcast, after submitting two drafts and hearing feedback, we believe the podcast to be very thorough in its look into Buddhism in Chinese and Japanese folklore. Despite a few organizational concerns and production improvements to work out, the podcast is interesting even to us who have worked on it for over a week now.

Nonetheless, to avoid further ranting on the state of the podcast, I will now discuss another tale from the Tang dynasty, “Princess Lotus.” 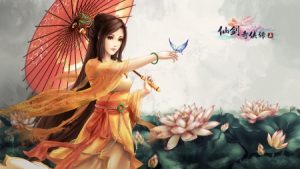 This tale is very similar to “The Dragon King’s Daughter” (in that it had no Buddhism influence for what we could tell and) since it is a love story of two very different individuals. Tou, the main character in the story, is said to be very poor, and the princess Lotus-flower is obviously of a wealthy, prestigious family. In a way Tou is victim to a Cinderella story that turns out to have all been a dream. However his moment of heroic, manliness did not end there, his dream was an analogy. The villagers in the royal family’s kingdom were bees and the giant serpent was a snake that had took over their hive. Tou made a new hive for them which goes on to prosper more and more every year thereafter.

This tale is found in Chinese Ghost and Love Stories; one can say this sounds like a fairy tale similar to the ones we heard growing up. Despite realizing it was all a vision-like dream, the story ends on a happy note with the monster dead and a community thriving. Although one could say the love story between Lotus-flower and Tou was a subplot to the real story of metaphoric significance, the fantastical elements of a princess and villain solidify one interpretation I reached.

The fantastical elements are meant to captivate, but also remind the listener of the impossibility of a beautiful, rich women marrying a poor man. The story is meant to allow the listener to dream alongside Tou, but their aspirations shouldn’t change at the end of the story. At the end of the story, Tou’s life doesn’t really improve at all, if anything he provides shelter for the bees to ensure their survival. Based on the historical context of the Tang Dynasty, this relates to Tou’s assumed occupation of farmer since he is explicitly poor. Tou can only dream of love; his life is dedicated to his work. He gives the bees–which remember are the people in the dream–the means to thrive. In reality, that is as far as he can go.

Well, that’s my last blog post. Thank you to those who have followed along, it has been fun.

This is Adam Riekert, signing off. 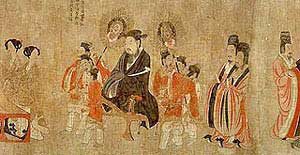 “Emperor Tang Taizong commissioned this portrait of himself with 12 previous emperors tracing back to the Han dynasty as a warning to his son, the prince, to learn from the mistakes of his ancestors.”

Thank goodness it’s Friday! Unfortunately, Group 2 will have a lot of research to do over the weekend. To summarize our previous posts, our group has a lot of important, individual interests while simultaneously lacking the will to narrow it down to a concise thesis at this point in time and based on our limited knowledge of the captivating themes. Furthermore, it will be difficult to compare and contrast Japan and China when those themes don’t necessarily transfer across all that smoothly.

Here are just some ideas we’ve been researching and discussing as of late:

Nevertheless, the first presentation went well, and after this weekend we will have a much more specific plan to execute. As it has been said, we are still brainstorming. Therefore, allow me to go into detail about a specific idea previously mentioned.

Personally, I am very interested in the Tang dynasty. Prior to this cycle, China was under warring times in which power was decentralized and many families across the nation grappled for power. Finally it was unified, and under the first emperor of the Tang dynasty, Kao zu, many reforms were made. His son, Tai zung, after killing his brothers and forcing his father to step-down, started the golden age of China. It was towards the end of this dynasty that Buddhist influence in the state faltered, and a more pragmatic approach to state-building was later adopted by the Song dynasty.

If primary sources are available, this time period would be really interesting. First off, there is still a pervasive belief in the mystical. However, the role of Buddhism in China is changing, which could be evident in folktales. In addition, strong, centralized power could have an influence on literature, and obviously the only primary sources we can make use of are the ones written down. Therefore, literature (specifically folktales) can be recorded and commissioned for the purpose of creating order. Basically, warring clans and invading neighbors were a frequent occurrence in China’s long history, so whenever there is a long, prosperous dynasty it is worth examination. And specifically, the Tang dynasty is the perfect period since it is rich in Buddhism, Animism, and Chinese literature.

That’s all for now. Happy weekend!