The kuchisake-onna is the product of a country trying to return to its roots during a period of rapid modernization. She is a bridge between the mystical yokai of the past and the horrors that fit a new age; a new type of yokai that fit themselves into the concrete and lights and traffic of a large city.

The kuchisake-onna’s tale spread throughout Japan in less than a year, and like any other story, it has many different versions. At its base level, the story is always about a woman with a surgical mask that hides horrible cuts on her face. She approaches her victim in the dark and asks, “Am I pretty?” If the victim says no, they are killed. If the victim says yes, she rips off her mask to reveal her disfigurement and asks again, “Am I pretty?” The victim can at this point choose to say no, leading to death, or yes, which prompts the kuchisake-onna to attack and cut her victim’s mouth like her own.

The different versions of the story add bits of pre-existing motifs from other yokai or insert other cultural anxieties into her tale. She can seem very real because of her appearance. She’s human, and the fact that she wears a surgical mask only allows her to camouflage herself easily. People in many parts of the world but in East Asia in particular often wear these masks to filter pollution or as a precautionary measure against illness. Her setting is a lonely street or subway, and her story is just familiar enough to be believable, though her origin story changes depending on who tells it and in which prefecture. This example from Nomura Jun’ichi shows a combination of the most common origins of the kuchisake-onna:
There are three sisters. The oldest had cosmetic surgery and, mistakenly, her mouth was slit open. The second sister was in a traffic accident and her mouth was slit open. Because of that, the youngest sister went insane, slit open her own mouth and was put into a mental hospital. She escaped and has appeared in town. Her hair is long; she always wears a mask and holds a scythe in one hand. If you give her candy [bekko-ame], she won’t chase after you. Or if you say “pomade,” you can run away. (qtd. in Foster 2009, 186)

In a society dominated by men, the kuchisake-onna was both a cautionary tale against cosmetic surgery and a commentary on the pressures women endure to change themselves and be beautiful per society’s standards. Michael Dylan Foster also suggested that the story of the kuchisake-onna served several purposes. She reflects some of the conflict with the shifting role of women in Japanese society and the changing gender norms that came with it. On one hand, his discussion touches on how the kuchisake-onna is a symbol of the pressure women face to be beautiful. On the other hand, he says the kuchisake-onna was seen as a symbol of beauty as a weapon. He mentions one of the 1970s Japanese women’s magazines that he researched, and how an article about kuchisake-onna was placed right next to an advertisement for plastic surgery. The dangers of these operations were made to seem as if they were much less compared to an over-exaggeration of a cosmetic surgery horror story. (Foster 2007, 712-713)

Though the story of this yokai was first documented in the Gifu prefecture in 1978, connections were drawn through tale to other women yokai that existed earlier (Foster 2009, 184). This happened to quickly validate her existence in the yokai pantheon. During the time her story first arose, Japan was going through an identity crisis. The rapid industrialization and urbanization of Japan led to programs being created that focused solely on the country’s past. Tours of the countryside were created in order to bring people back to the roots of their traditions, and the popularity of yokai soared. It wasn’t the popularity they had before the Meiji era, however. This was a popularity brought about by the commercialization of the myths many people had grown up with, so while the majority of citizens knew about yokai, these tales didn’t hold the same power over people that they once did. The nostalgia for the mysteries of the yokai did not have a place in an urban environment, and it makes sense that a new horror would be born in a turbulent and nostalgic time. As Foster aptly summarized it, “Just as migrants to urban centers had transformed their lifestyles to accommodate the spaces of city and suburb, so too the mysteries of the past could refashion themselves to be compatible with anonymous streets and concrete apartment buildings.” (Foster 2009, 187)

The kuchisake-onna is now in horror movies around the world, but it began as nostalgia for the mysticism of the yokai in pre-war Japan. The rapid growth of the country into the modern age brought about radical changes to many aspects of society, and since yokai grew and evolved with the culture up until this point, it only made sense that modern yokai would be radically different from how they were before. However, like Japanese culture today, the yokai still have their roots in the past. The kuchisake-onna may have been inspired by the turmoil of urbanization, but her stories are still reminiscent of the yokai before her.

Since we spent most of the day talking about films and how they re-tell stories or bring stories to life I wanted to throw one of my recent favorites into the pot. Kubo and The Two Strings is certainly more of an adventure film than a horror film, but this stop-motion journey from the studio that created Coraline is steeped in Japanese mythology and imagery. Kubo and the Two Strings, set in late-ancient Japan is, at its core, a story about family. It just so happens that Kubo is a descendant of the Moon King, and in that lies the conflict. Kubo’s mother wants for her son to live the life of a normal human, experiencing the feelings of humanity for better or for worse. Kubo’s grandfather wants to bring Kubo into the family business of ruling over the heavens in a cold, dispassionate eternity. When the Moon King finally gets wind of where Kubo and his mother are hiding he begins an arduous search which thrusts Kubo into a journey helped only by a monkey and a samurai beetle. Not to mention Kubo’s own magic powers which he channels through his trusty shamisen (pictured below). For fear of giving away the rest of the story that is where I will end my summary. 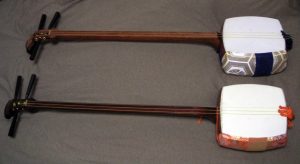 Given the setting of late-ancient Japan, the story is rich with the ideas, practices, and mythologies of the Japanese around this time. Ancestor worship, Yokai, and magic play a major role in the plot. There are many scenes in which characters of varying importance speak about the importance of honoring ancestors and conversing with those that have departed. Also, the outcome of a climactic scene is directly impacted by the bonds of the characters and their ancestors. As for Yokai, the giant skeleton that is represented on our syllabus is a key antagonist, as well as dragons and sea monsters. Most importantly the magic shamisen that Kubo plays is almost a character in its own right. This shamisen is the vessel of Kubo’s magical power which creates a very interesting dynamic and an even better soundtrack. The creators of the film showed care and attention to detail when crafting this tale and its setting. So much so that I was able to watch it and pick out points that we explicitly went over in class.

Overall, Kubo and The Two Strings is a very good film with a lot of heart and excitement. It is a gorgeous film that is very easy and enjoyable to watch, while also keeping the mind engaged about how we understand storytelling in our modern age. Also, it gives wings to the words and lectures we read and hear in class, driving the points just a little bit closer to home. Overall, Kubo and the Two Strings is great viewing for anyone who likes adventure and has enjoyed the class so far. Stay tuned for more updates from Shudan Borei on the podcast and other interesting posts.