Hello everyone! This will be our last blog post. Today in class our group gave its last presentation where we talked about the production of our podcast from start to finish. Thank you for going on this journey with us and we hope you will enjoy listening to our podcast! This is Group Death signing off. 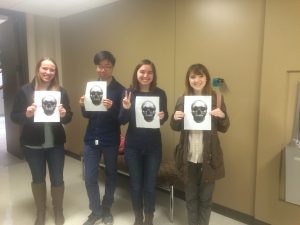 These past three weeks have flown by. Now we are at the end with this being the final blog post. We have all worked hard these past three weeks, accomplishing pretty much everything that we had to do. The first day was definetly a little intimidating, with the workload seeming to be ridiculous. But once we got down to it, making the podcast, and doing all that research turned out to be fun. I had an enjoyable time with my group,  and we were able to get a lot down while having fun. Overall I enjoyed this class immensly and wanted to thank all of my group members and Dr. Harney. This is group 2( we decided to stick with since it was too late to change it) signing off.

Although this class was short, everyone in Group Heian agrees that getting to know each other was a worthwhile experience. I hope everyone feels the same way about their respective group members. We all hope to incorporate the podcast making skills learned in this course into future projects. While the course did not fulfill Jacob’s hopes to study one of his all time favorite films, Mulan, he felt very satisfied with the material and subject matter covered. Throughout the course, Maddy became much more confident with speaking, in presentations and in the podcast, and with doing historical research. In addition, Will was happy to study gender, a topic of particular interest to him, in the context of East Asian history and the stories covered. Maddison, with a keen eye for editing, made our podcast flow much better that it did in our original draft — learning how to edit podcast scripts to sound more casual and interesting in the process. During the course, I learned a good deal about the mechanics of editing sound using the software Audacity. I also learned about a subject that I knew little about before taking the course: East Asian history.

From everyone in group Heian, thank you for reading our posts and please listen to our podcast. 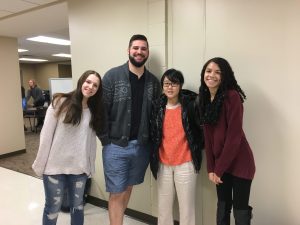 Finally, we have a group photo! Our podcast is finished and Centreterm has come to an end! We had a blast working on this project. Thank you all for your support. Keep a look out for our podcast upload!

Our group still feel like it is not a time to address a final touch, since we still have a tomorrow. And we all agree to talk something interesting. I am interesting to find that in American pop culture, there are stories about half-human monsters, like the bigfoot and the mothman. There is also a very famous half-man monster, the cat-face old lady. The folk comes from the north-east China, but it is so sensational that even me as a southerner know. The cat-face lady was said to die around 1955. And at the instant she died, a cat happened to come across and jumped onto the death’s body. The dead corpse eeriely came back to “life”, but turned into a creepy monster with a cat-like face. The monster hanged around the north China in following years, and was reported by unofficial source that she ate small children and caused a few deaths. The following picture is said to be the old lady and there is even a film about it. The realness of the story is still under discussion, since so many people claim online they had experienced this incident and remembered that even the official newspaper talked about it, though it was later blocked by government. However, in Chinese folk culture, there are lots of stories about “jump-up corpse” (诈尸). 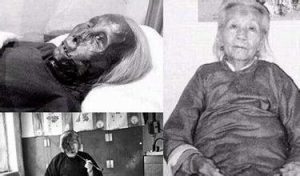 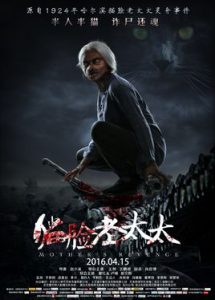 Greetings everyone! Just a quick update for today’s post. In class, three groups presented on the production of their podcast episode. Tomorrow we will be doing the same where we will talk about:

We look forward to sharing our work tomorrow! For our classmates, there will be a little surprise at the end 🙂 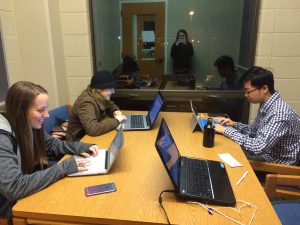 This is our second to last blog post! This CentreTerm has seemed to fly by and there is one more day left!

For the Shudan Borei, we have been hard at work putting the final touches on our podcast, adding more questions and discussions to flesh out our ideas. We are deciding what is staying within our podcast and removing what we don’t think is necessary. There is also quite a bit of chaos in some of our discussions that we are cleaning up so that our podcast comes across more professional than our group work.

We are also creating and rehearsing our final presentation which is going to be fire and very humorous.

The final touches have just been put on Group 2’s podcast. It was a great process and we had a lot of fun recording, splicing, editing, researching, etc. We gave our final presentation today as a group and now we are just waiting until tomorrow to officially submit it. We hope you give it a listen and enjoy.

Hey everybody,
For perhaps the final time ever, Group Heian is back again today to give an update about the progress being made on our podcast. As far as audio production is concerned, we’re simply making some minimal final tweaks. Having presented today for the class, we know that our time together is quickly coming to an end, so today we’ve been hard at work to ensure that the final podcast is the best we can make it. Personally, I’m proud of the work we’ve accomplished as a group and I believe that everyone has come out of this class with a positive experience. Hope you all enjoy the final product! 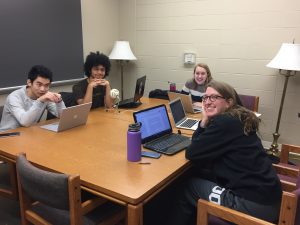 Don’t let the faces fool you! We are actually upset that this class is ending, but we are happy to be working and making progress on our podcast. We are working on the finishing touches and boy, are we excited! We have prepared our presentation for tomorrow and will practice later this afternoon. Group Mononoke signing off!! We out!!