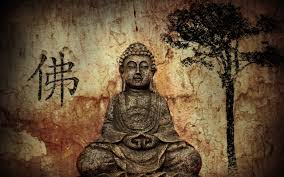 In this episode of “Gods, Ghosts, and Spirits of East Asia”, Group Two discusses Buddhism and Buddhist themes that connect a Chinese tale and a Japanese tale. These tales come from the Tang Dynasty period of China (618-907 C.E.) and the Nara to Kamakura period in Japan (800-1300 C.E.) and are “The Crazy Bookworm” from Chinese Ghost and Love Stories and “The Invisible Man” from Japanese Tales.   The tales also had underlying themes of preexisting ideologies and religions from the respective countries, which are some interesting talking points in the podcast.

Adam and Trace covered much of the historical background and context for China and Japan.  They were  extremely valuable resources when it came to the historical background because they both are very knowledgeable about China and Japan.  Thomas and Emily really enjoyed looking into the tales and summarizing them for the podcast.  They found the themes of Buddhism and the preexisting themes of Confucianism and Shintoism that were tied into the stories interesting.  Kaylyn became the expert on Buddhism and gives an overall introduction of Buddhism to the listener.  All members of the group contributed to the discussion and gave their thoughts and views throughout the podcast.

Special thanks to Kaylyn and Thomas for the production and editing of the podcast and shoutout to Dr. Harney for his valuable insight on creating a well-organized and cohesive podcast!