Inspired by the screening of Stephen Chow’s Journey to the West today, Group Naga would like to take a little detour from our usual posts on dragons, snakes, and group updates and instead post on Stephen Chow’s work.

Chow’s other cinematic work, Kung Fu Hustle, had been mentioned a couple times and, because the name sounded somewhat familiar, I decided to google it. When clicking on the images tab, one of the first images is of the landlady character below: 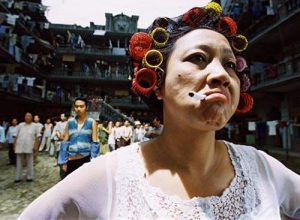 I quickly recognized this character and realized that I had, in fact, seen at least one of Stephen Chow’s other films before today. Kung Fu Hustle follows the story of Sing and Bone as they try to gain membership into a very dangerous group in China, the Deadly Axe Gang. Besides the fact that it shares a director, this movie has many other similarities to Chow’s later work. I found both films to be entertaining partly because, as was noted in class with Journey to the West, it is actively making fun of itself and enlisting humor throughout. (Check out this clip for a humorous scene: https://youtu.be/xssCyfRu3iM) Besides the fact that the Landlady character looks amusing, walking around in a nightgown and hair rollers with a cigarette at all times, she also acts amusingly, and I think that’s part of what makes her so memorable. If readers manage to make it to the end of the previous clip, you’ll see what I’m talking about.

Besides the humor, Kung Fu Hustle also features action and martial arts intertwined with the magical as well as references to Buddhism. If you all enjoyed Journey to the West today, I highly recommend watching this other film.